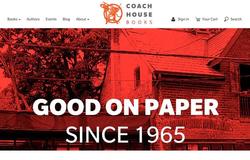 With 50 percent of book discovery happening online, and nearly half of all purchases taking place via e-commerce, book publishers require solid and secure websites that not only attract readers and book buyers, but that can also be relied upon day in and day out for promotions, reader engagement, and sales. A website outage -- even a short one -- can be disastrous.

Back in 2016, a new website was in development at Coach House Books when its old site became compromised and went down. It happened during the busy fall season, and Coach House, a long-established and well respected Toronto-based book publisher, needed a new site fast.

The Problem -- An old site that needed major updates 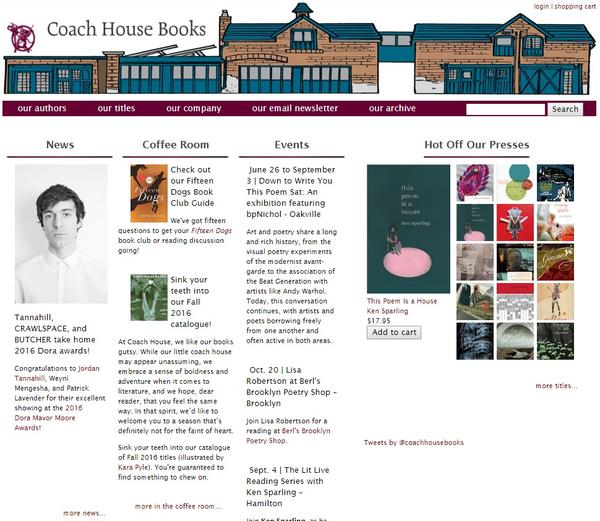 Coach House’s previous site had not been updated in several years, and was starting to show signs of age -- it wasn’t responsive to mobile, its design was not very user friendly, and back-end processes for metadata updates and order fulfillment were cumbersome. But even more concerning was the fact that the site had some potential stability issues.

“There were some concerns around the site’s reliability and security,” says Craig Riggs, ReaderBound’s co-founder, “and it turns out those concerns were well founded.”

In the midst of its fall season ramp up, Coach House’s site was hacked. “It was so badly compromised that the host turned off the server,” Riggs says. “We tried to recover the old site, but there was no backup, and no way for anyone to intervene and help.”

The Solution -- A quick turnaround on a ReaderBound implementation

Coach House looked to ReaderBound for a quick solution to its website outage, given the new site was still in the works and not at all ready to go live.

The ReaderBound team attempted to recover the old site, to no avail. Instead, we quickly put up a temporary page to direct traffic during the outage while we rushed to get the new ReaderBound site ready for launch.

The Result -- A lively community hub for readers, writers, and literary supporters 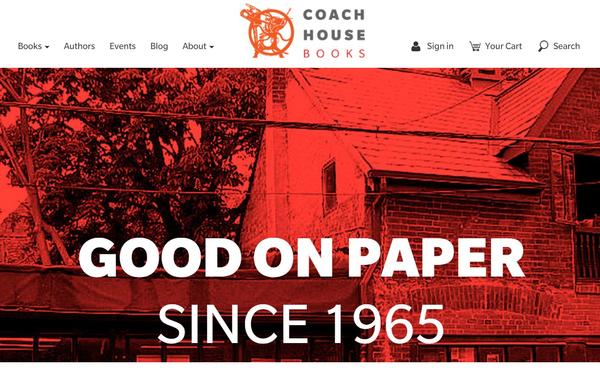 The new website launched in September 2016 as a hub for Coach House’s community of readers, writers, and literary enthusiasts, complete with an active blog, a monthly newsletter, and a popular weekly poetry sampler. Beyond direct sales, the new site’s primary role is to engage and expand the Coach House community.

Blog posts are featured front and centre on the homepage, giving readers a window into life at the press, as well as the latest news on Coach House books and authors. “We also do Sunday poetry posts from our authors,” says Ricky Lima, sales and marketing coordinator with Coach House, “and a lot of people come for that.”

Invitations to join the Coach House mailing list are prominent throughout the site, and visitors are regularly presented with great sales offers and imaginative campaigns. Readers are also invited to join a separate Sunday poetry mailing list.

The site is now closely synced to its ONIX repository, which pulls in new data automatically every 12 hours. This has been a big time savings for staff, says Lima. “We don’t have to worry about updating multiple sources.”

And online sales are growing. “To order books right on the website is so valuable, so we’re working to get more visibility on the store,” Lima says. “Customers don’t want to be sent to a third-party store.”

At Christmas, Coach House launched its holiday feature bundles, a sales campaign customization the ReaderBound created for them upon request. “Every ReaderBound site has a dedicated bank of support hours that they are able to use throughout the year,” Riggs says. “This can include new feature development or custom work.”

The customization resulted in an easy-to-set-up stream of new sales for the press. “We set up a coupon code and people can purchase books at a discount,” Lima says. “That drives a lot of traffic.”

Coach House does its own order fulfillment, but all ordering is automated through the site, which even generates a mailing label and postage. “We get immediate notification from the website about an order,” Lima says. “Through the website we keep on top of sales, what we need to ship, whether payment was accepted, etc.”

Coach House’s shopping cart is configured to process pre-orders, as well as international orders from customers around the world. It offers custom shipping options for Canadian customers, including an option for Toronto-based shoppers to pick up orders from the Coach House office.

As a ReaderBound client, Coach House now also receives ongoing maintenance as part of its setup. The ReaderBound team maintains and upgrades core applications, including site security and rolling backups. In fact, someone is always watching the systems and servers to make sure everything is in order and, if needed, to respond quickly with security updates or other required maintenance to ensure maximum uptime -- all the time.

"It has been great to work with ReaderBound on our dazzling new site – they're very responsive and quick to solve problems,” says Alana Wilcox, editorial director at Coach House. “And now we have a site that's dynamic, attractive, and flexible."